Expert tip: how to correct the soil for growing corn? 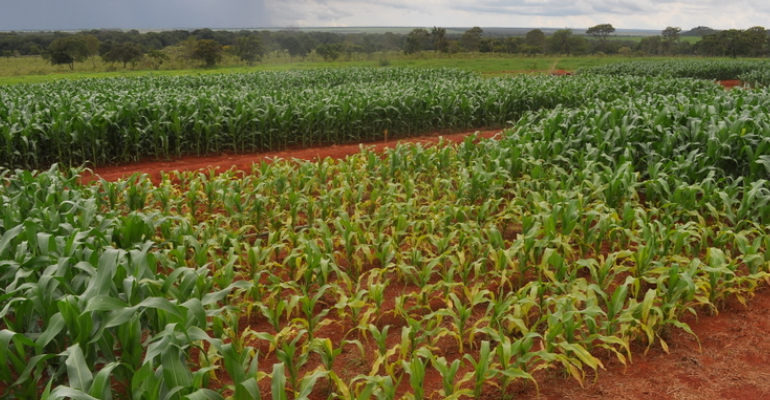 See what the consequences of soil acidity are in maize culture and find out what the expert's recommendations are to correct this problem.

Corn is the second largest crop of importance in agricultural production in Brazil, being surpassed only by soy that leads grain production in the country. The 2019/2020 Brazilian crop closed with a production of 101 million tons, according to the Department of Agriculture of the USA (USDA).

However, corn producers live with challenges related to soil quality, because most of the Brazilian soils have low natural fertility, with acidity conditions that limit the expression of the productive potential of corn cultivars, used by farmers.

It is worth mentioning that corn is classified as being of medium tolerance to the acidity and toxicity conditions of aluminum, requiring for this the adoption of managements that aim to correct the soil for corn cultivation.

For this reason, we have the participation of Embrapa Corn and Sorghum researcher, Álvaro Vilela de Resende, to understand more about the acidity of the soil and the tips to correct this problem.

Soil acidity: what are the consequences for corn?

The process of soil acidity has been going on for centuries. But, in a simplified way, Resende explains that, during the long weathering process that led to the formation of Brazilian soils, the substrate derived from the rocks lost the basic character elements (Ca, Mg and K), with aluminum (Al ).

“This, in addition to expressing an acid character, contributed to the reduction of soil pH, causing toxicity to crops in general. The higher the saturation by Al in the soil, the greater the difficulty for plants to develop roots and explore the profile for nutrient and water absorption ”, adds the researcher.

Therefore, soil acidity may involve a combination of three problems:

In the most critical conditions of these problems, the development of the crop is totally compromised, as seen in the figure below, which represents an experimental area at Embrapa Cerrados that presents high soil acidity.

The researcher also explains that, in practice, producers have to deal with more pronounced acidity in the first years after the opening of the area or the conversion of degraded pasture into crops, especially in the Cerrado region.

But, he points out that the consolidated cultivation areas, which have already received applications of corrective materials, are also subject to reacidification. "Any crop tends to have some degree of acidity in the soil, and the challenge is to maintain a continuous process of diagnosis and control measures", he recommends.

Main errors related to soil correction. How to avoid them?

Corn, like most annual crops, thrives best when the pH in water is above 5.5. “After this pH value, the problem of aluminum toxicity is usually solved,” says Resende. In addition, the soil must also have adequate levels of Ca and Mg.

However, the researcher points out that in the desire to reach this pH, many producers make some mistakes, in case the limestone is not reapplied after a certain period of time. “It is common for the producer to apply lime once and spend a lot of time without reapplying it,” he says.

Still according to the researcher, liming with well done incorporation (use of plowing and harrowing) may be enough to control acidity for up to three years or more. However, the more intensive the cultivation of the area, the shorter the residual liming effect will be.

In this case, the recommendation of the researcher at Embrapa Milho e Sorgo is to adopt a monitoring work with sampling and more frequent analysis of the soil.

“In no-tillage, this monitoring must be even more careful, since as it is no longer possible to incorporate correctives (absence of soil preparation) and the lime distributed on the soil surface takes longer to react and have an in-depth effect on the profile, it can be to say that the control of acidity must be preventive ”, he points out.

Thus, the researcher recommends that the soil under no-tillage should receive periodic applications of lime so that, over time, the reaction and deepening of the alkalinization front will occur, in order to keep the 0-20 cm layer properly corrected. Plaster, on the other hand, presents greater mobility in the profile and acts to improve the root environment in the subsurface.

Another important precaution is to calculate the amount of limestone or plaster to be applied according to the most used methods in the region and according to the indicators of the soil analysis. "Under or overestimated dosages can result in low technical and economic efficiency", comments Resende.

Resende also stresses that the uniform distribution of corrective agents is not an easy task. "As these materials are almost always fine and there is a lot of dust production, poorly regulated equipment or the occurrence of strong wind during application can lose all the effort of the producer to homogenize the crop in an ideal level of acidity control".

And the researcher concludes: "Although they often go unnoticed, problems of this nature reduce the overall productivity of the field, and care is needed to minimize these failures when looking for the conditioning of environments with high productive potential".

What if the agrochemicals used in your production had Artificial Intelligence?
29 Mar, 2021

Startups: how to become accredited at MAPA for tests on agricultural products?
29 Mar, 2021